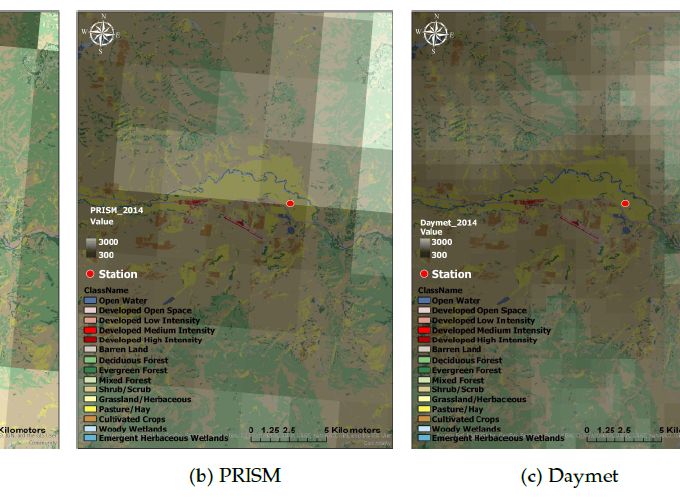 Accurate spatial and temporal precipitation estimates are important for hydrological studies of irrigation depletion, net irrigation requirement, natural recharge, and hydrological water balances in defined areas. This analysis supports the verification of water savings (reduced depletion) from deficit irrigation of pastures in the Upper Colorado River Basin. The study area has diverse topography with scattered fields and few precipitation gauges that are not representative of the basin. Gridded precipitation products from TRMM-3B42, PRISM, Daymet, and gauge observations were evaluated on two case studies located in Colorado and Wyoming during the 2014–2016 irrigation seasons. First, the resolution at the farm level is discussed. Next, bias occurrence at different time scales (daily to monthly) is evaluated and addressed. Then, the coverage area of the gauge station, along with the impact of the dominant wind direction on the shape of the coverage area, is evaluated. Ultimately, available actual ET maps derived from the METRIC model are used to estimate spatial effective rainfall. The results show that the spatial resolutions of TRMM and PRISM are not adequate at the farm level, while Daymet is a better fit but lacks the adequate latency versus TRMM and PRISM. When compared against local weather station records, all three spatial datasets were found to have a bias that decreases at coarser temporal intervals. However, the performance of Daymet and PRISM at the monthly time step is acceptable, and they can be used for water resource management at the farm level. The adequacy of an existing gauge station for a given farm location depends on the willingness to accept the risk of the bias associated with a non-persistent, non-symmetric gauge coverage area that is highly correlated with the dominant wind direction. Among all goodness of fit statistics considered in the study, the interpretation of the summation of error makes more sense for quantifying the rainfall bias and risk for the user. Finally, based on the USDA-SCS model and actual spatial ET, overall, seasonal effective rainfall tends to be less than 60% of total rainfall for agricultural lands. 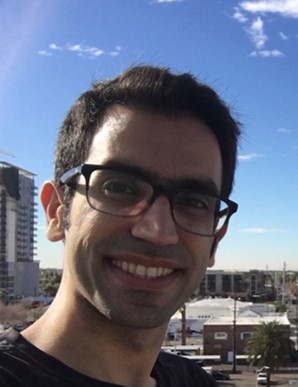